Ascites in chickens, commonly referred to as water belly, represents a spectrum of physiological and metabolic changes leading to the excess accumulation of fluid in abdominal cavity. These changes occur in response to a number of dietary, environmental and genetic factors.

The term ”ascites” actually refers to the fluid accumulation in abdominal cavity: so-called “water belly”. The disease is more scientifically known as pulmonary hypertension syndrome. Ascites is most commonly diagnosed at 4 to 5 weeks of age. Total mortality due to ascites is higher in the male parent lines, which have the capability of faster growth and higher muscle deposition compared to the female lines (Dewil et al., 1996).

The pathology is associated with abnormally high blood pressure between the heart and lungs (pulmonary hypertension) leading to heart failure, increased blood pressure in the veins, and excessive build-up of fluid in the liver which leaks into body cavity (Maxwell, 1990).

Characteristic symptoms of ascites in chickens 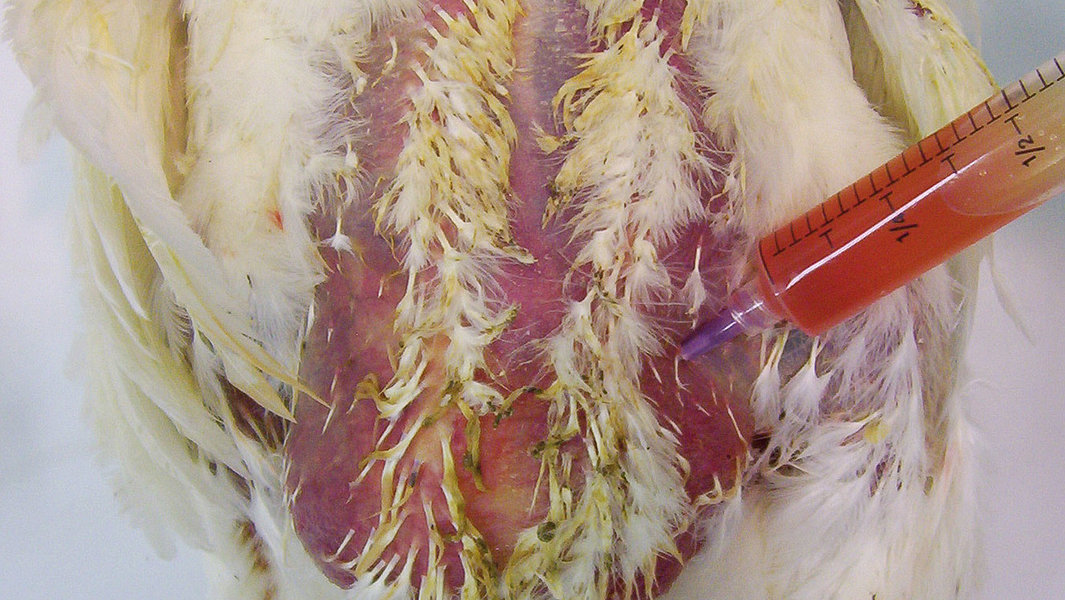 The etiology of ascites is very conflicting. Usually genetics have been blamed for water belly in poultry. However, the breeding companies have improved genetic resistance of the stock to the ascites.

A combination of factors leads to ascites:

Another pathogenic agent is a mold, Aspergillus fumigates, occasionally present in the environment of all poultry. Disease caused by this mold, so-called ”brooder pneumonia”, forms mould colonies in the lungs, and produces hard nodular areas leading to air sac infection and subsequently to the development of ascites.

A considerable number of ascites syndrome in broiler flocks is caused by microorganisms. Most of the Gram-negative bacteria (E. coli, Salmonella sp., Campylobacter) are considered pathogenic because of their lipopolysaccharide (LPS) layer.

Some studies have shown that LPS triggers pulmonary vasoconstriction leading to ascites (pulmonary hypertension) in broilers (Chapman et al., 2005). Airborne LPS is ubiquitous in the environment of broilers, and is positively related to the amount of organic dust in poultry houses (Zucker et al., 2000).

For example, respiratory exposure to E. coli can amplify the incidence of ascites five-fold in broilers. It is known that Salmonella typhiumurium may cause up to 79% mortality in one week old chickens. However, in some studies lesions of salmonellosis were reported for 4 to 6 week old broilers with E. coli co-infection consequentially leading to ascites (Ganapathy et al., 2000).

Firstly, it is important to understand the underlying causes of an ascites occurrence on a poultry farm. In the case of ascites caused by genetics, feed restriction might reduce the effect of the disease. Slower growing birds have reduced oxygen needs allowing the cardiopulmonary organs (heart and lungs) to keep up with oxygen demands of the birds.

However, reducing feed intake decreases broiler growth performance. Feed restriction is only of economic benefit when the incidence of ascites is very severe.

In the case of ascites caused by microorganisms, recent studies investigating the effect of feed supplementation with acidifiers have shown promising results. Of course, optimal management practices are also very important for reducing the problem of ascites and maximising performance of broilers.

Improvements in growth performance and decreases in mortality rates, as well as benefits in alleviating ascites in chickens have been observed in recent trials with BIOMIN’s acidifier product Biotronic® SE.

Nine hundred day-old Cobb 500 male broiler chicks were divided into three groups. The birds were fed a corn-soybean meal diet. The Negative control group diet contained no feed additives, whereas the diet of the Positive control group was supplemented with an antibiotic growth promoter (AGP), and the trial group was supplemented with the acidifier Biotronic® SE (BIOMIN GmbH) at an inclusion rate of 1.5 kg/t feed. The duration of the trial was 46 days. The weight of the birds was recorded on days 14, 35, 42 and 46. Mortality and observations of the birds for abnormalities (diarrhea, depression, immobility) were carried out daily.

The trial was conducted on a commercial broiler farm 2600 metres above sea level in Bolivia. The mean external ambient temperature was 18°C, and the humidity was 40%. The birds were vaccinated against Newcastle, Infectious Bronchitis and Infectious Bursal disease.

Necropsy of the dead birds revealed the characteristic lesions of ascites. Amber or clear fluid (lymph) was found in the abdominal cavity, hearts were enlarged with fluid in the pericardium (the sac surrounding the heart), livers were swollen and congested and sometimes with fibrin adhered to their surface, and lungs were pale or grayish.

By the end of the week 7 the mortality in the Negative control and Positive control groups reached 15.39% and 7.53% respectively whereas the group fed diets supplemented with Biotronic® SE recorded the lowest mortality rate at 6.76%. 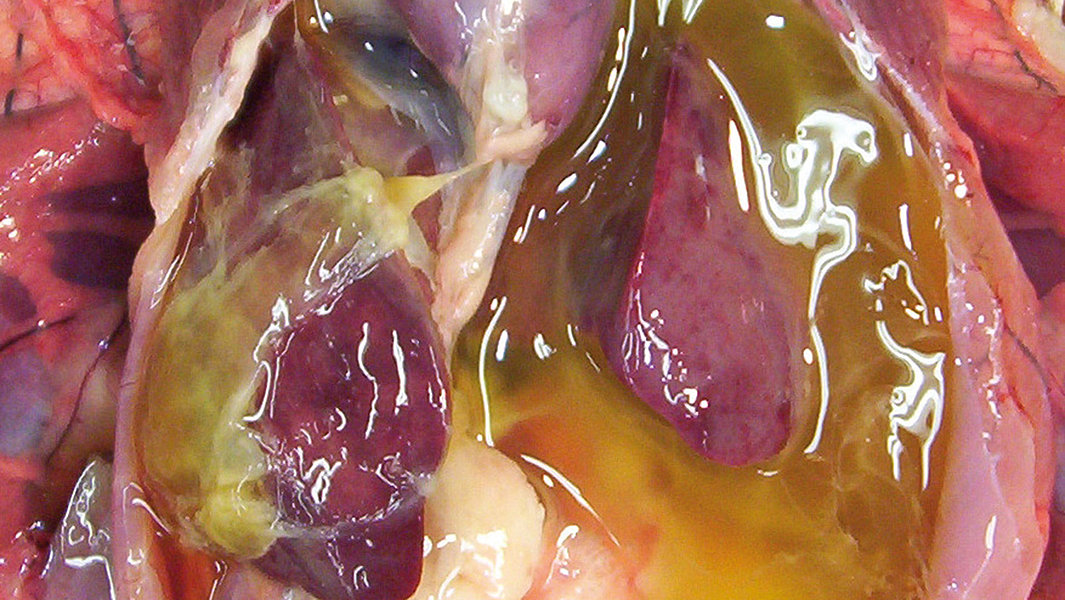 This trial result demonstrated that diet supplementation with the acidifier Biotronic® SE represents a solution to alleviate the effect of ascites on broiler farms. In this study, ascites could be attributed to a microbial cause, most probably Salmonella sp. or E. coli and some other co-infection agents.

The genetic cause of ascites herein might be excluded, since the growth of the broilers was much lower compared with the standard growth performance of Cobb 500. Due to poor hygienic conditions on the farm, conditions for the proliferation of pathogenic microorganisms in the environment and feed were favourable.

Moreover, some predisposing factors such as high altitude and insufficient ventilation were present, exacerbating the ascites syndrome in this broiler flock. Due to its antimicrobial effect, Biotronic® SE improved the environmental hygiene and prevented the feed from microbial and fungal deterioration.

In addition, dietary supplementation with acidifiers is known to decrease the occurrence of pathogenic bacteria in the gastrointestinal tract thus improving the animals’ health status. This was confirmed by the reduction of mortality rates in the Biotronic® SE group compared with the Negative control and Positive control (AGP) groups. In this trial, the addition of Biotronic® SE to the feed was effective in alleviating the effect of ascites caused by microbial factors in broilers.

The Biotronic® product line consists of products available in both powder and liquid forms for application in feed and water - ideal and practical solutions for prevention and control of ascites outbreaks in broiler flocks.

What to Do with Flooded Grain

How to deal with flooded corn, wheat and other stored crops

Several lesser-known effects of mycotoxins in poultry related to disrupting gut integrity reinforce the importance of mycotoxin risk management to protect the health and profitability of flocks.

The Right Mycotoxin Testing Method for You

Regular mycotoxin screening is the cornerstone of protecting your animals and your profits. Here’s how to find the right fit for your operation.

The effect of Digestarom® on poultry meat quality

The poultry industry has shown a great deal of interest in broiler meat quality in recent years, probably because consumer preference for poultry meat has changed considerably in this period.

The views of more than seven hundred agribusiness professionals on the use of phytogenic feed additives (PFAs) reveal a number of interesting insights regarding motivations for using PFAs.